Do you know if the food your eating contains harmful artificial sweeteners AKA fake sugars that are harming your reproductive health?

Don’t feel guilty if you don’t know the answer! Fake sugars are hard to spot in prepackaged foods.

Since studies are showing the harmful affects of artificial sweeteners on the human body, food corporations have begun labeling common fake sugars with new names.

This is very deceiving and makes it tricky for you to know what’s in your food.

When you’re trying to conceive, nutrition plays a valuable role in a potential pregnancy.

Many people will argue that artificial sweeteners are harmful not just from a nutrition standpoint, but they are also terrible for reproductive health.

Let’s take a look at the research in relation to fake sugars and fertility and how you can replace artificial sweeteners with a healthier alternative!

What Are Artificial Sweeteners Or Fake Sugars?

Artificial sweeteners are a chemically altered sweetener that’s used in a variety of foods today as a low calorie option.

These types of sweeteners are commonly used by diabetics in order to control blood sugar levels without substituting taste.

Although many fake sugars may leave an after taste that’s unpleasant to some, they are normally sweeter than regular sugar.

This makes artificial sweeteners a popular choice for adding into foods that companies believe need extra sweetness for taste value.

According to the Food and Drug Administration, there are six sugar substitutes that are cleared for consumption.

Keep in mind that all six of these artificial sweeteners are labeled under many different names. But don’t worry about that for now…

Related Articles: How The Keto Diet Can Change Your Fertility Health

7 Vitamins To Boost Fertility In Women

Honestly… A ton of prepackaged foods on the market! Much of the six artificial sweeteners above are often found in foods labeled “Sugar Free” or “Diet.”

Unfortunately, the foods that are suppose to be good for you because of low calories could be causing more harm than good when it comes to your fertility health.

To identify which foods contain artificial sweeteners, always read the nutrition labels of your most beloved foods.

There are many more than these few food items listed, but the list continues on forever.

The best advice I can give as to whether a food item has an artificial sweetener or not is by assuming that it it’s prepackaged, not made from scratch, there’s a good chance it does contain fake sugars. 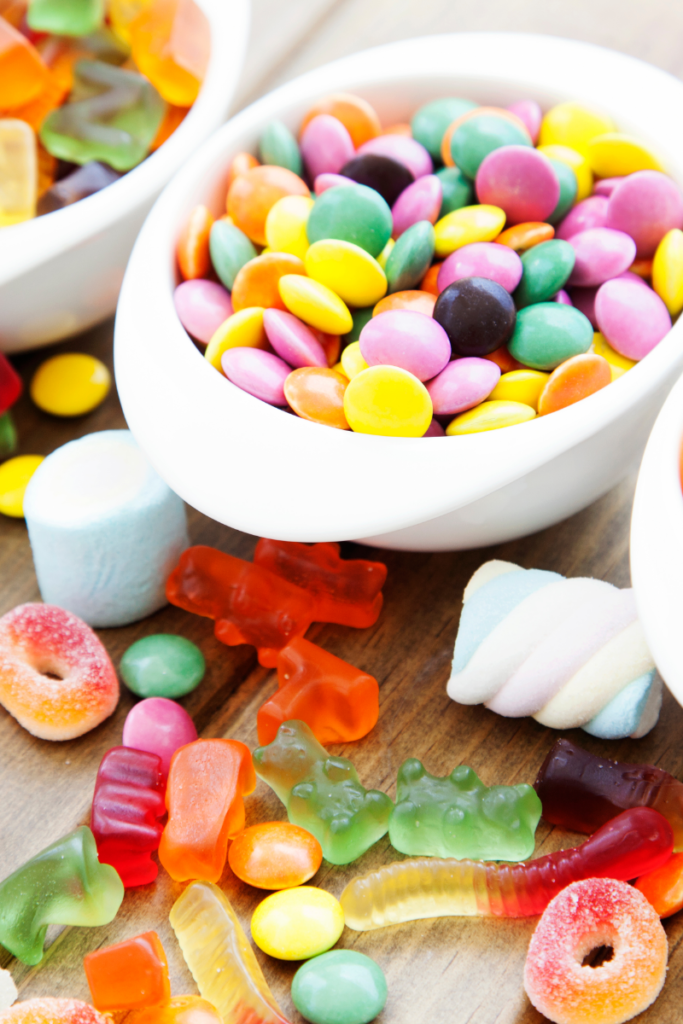 Now that you know the different types of fake sugars and just how many products contain artificial sweeteners, let’s dive into the science behind sweeteners and your fertility.

Because of this, the fake sugar known as saccharin came with a warning label and further research to be conducted.

While there are no longer warning labels for this particular sweetener, it’s hard to find foods and beverages without fake sugars because they are found in over 6,000 products. Yes, 6,000!

Of the 6,000 products with artificial sweeteners, each of the six sweeteners approved by the FDA received a rating of GRAS (generally recognized as safe).

That rating is determined by scientific research, but companies can test the safeness of a sweetener for GRAS rating without consent from the FDA.

Although fake sugars do not add to the waist line or tooth decay, research is discovering that artificial sweeteners have a profound affect on fertility and fertility treatment success.

In a 2016 study, 542 women undergoing IVF (in-vitro fertilization) with ICSI (intracytoplasmic sperm injection) were asked before treatment about their consumption of sugar and artificial sweeteners.

From these results, the researchers found a positive link between artificial sweetener consumption and the success of treatment.

While this study does find a connection between decreased fertility treatment success and fake sugars, there is to date no study concluding that artificial sweeteners cause infertility.

But according to the Fertility Authority, a study found that the consumption of aspartame caused infertility in rodents.

The study found in both low and high doses of aspartame, the pituitary gland, prolactin, growth and luteinizing hormones were disrupted causing an abnormal release of these important sexual function hormones.

Now, rodents are (obviously) not people and animal studies are controversial because animals have much different reproductive systems than humans, so it’s important to take the results with a grain of salt!

Both studies show some promising results when it comes to decreased fertility and fake sugar. But the fact is…

More research needs to be done! Fake sugars are essentially chemicals that mimic the sweetness of real sugar.

My advice when it comes to artificial sweeteners and trying to conceive: If there is even a small amount of research or even if the research is inconclusive…

Eliminate artificial sweeteners as much as possible while trying to conceive!

When it comes to your fertility and conceiving a health child, it’s better to play it safe and remove any unnatural food additives from your diet. It will only aid you fertility in the end to remove them.

Although artificial sweeteners are considered to be generally safe, further research needs to be done in connection with fertility.

Some other general negative side effects associated with artificial sweetener consumption include: 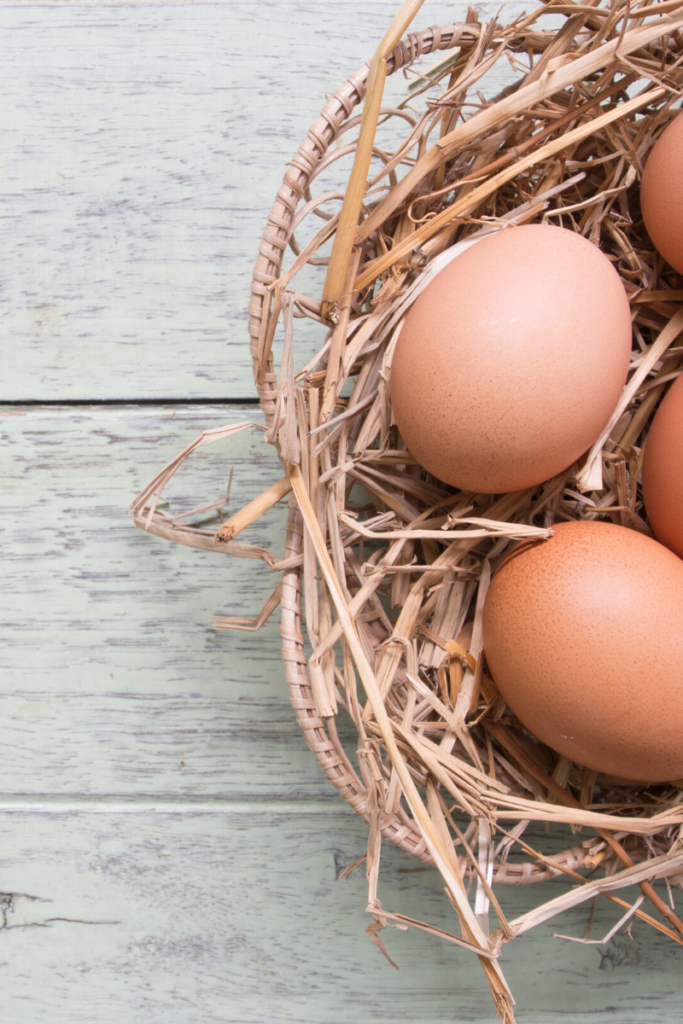 So what do you use in place of artificial sweeteners?

First off, let me just say that completely eliminating all artificial sweeteners from your diet is VERY hard.

There are many obscure names for fake sugars and companies like to throw them into products without your knowledge.

The best way to start removing fake sugars from your diet for fertility health is to start reading nutrition labels.

Every nutrition label comes with a list of items found in the food. That’s where you will find any hidden fake sugars you were not aware off.

Anything that’s not synthetically made is a good option. But just like regular sugar, other natural sweeteners need to be used in moderation.

Agave syrup is an all natural substitution for artificial sweeteners.

It is cultivated from the agave plant and hosts benefits like containing anti-inflammatory properties and can boost the immune system.

Agave also contains fructans that are believed to lower cholesterol and suppress appetite.

While this is a great substitute for fake sugars in a variety of foods, it’s not exactly diet friendly.

Therefore, if you are dieting agave syrup may not be the best replacement.

This all natural sweetener is perfect in teas and substituting in many recipes!

I’m a huge coconut fan! I’ve found most people either love it or hate it. There’s really no in between with coconut.

Overall, coconut offers many nutritional benefits. As a sugar it’s a great substitute for fake sugars when it comes to baking.

Personally, I can’t tell the difference between using regular sugar in a recipe and substituting it with cocounut sugar.

Coconut sugar is a must-have in my kitchen pantry!

It offers the following benefits:

Always make sure to read the labels of honey jars and containers carefully.

Fake honey is often sold as “real honey” with a very fine print on the bottles saying “honey substitute.”

I’ve done this many times where I went to purchase real honey only to get home and realize I’ve picked up the fake stuff!

Honey has been used for thousands of years in medicine and for adding sweetness to dishes.

But be aware that when replacing honey in a recipe it will add more moisture and easier browning.

I am guilty of burning dishes when using honey!

Not only does honey bring a unique sweetness to any dish or beverage, it also gives you amazing benefits including:

The benefits list of honey continues when you dig deeper into Ayurvedic medicine uses! 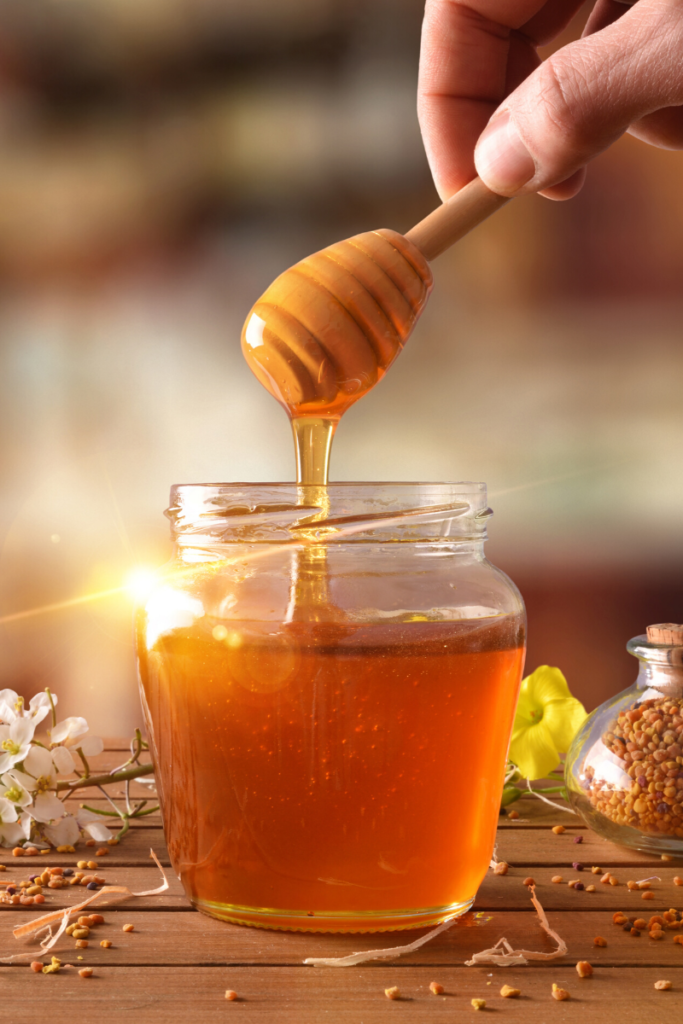 Honestly… I debated whether to put Stevia sweetener to this list of replacements for fake sugar.

Some people believe Stevia is just as bad as all the other fake sugars. But there is one difference that separates Stevia from other sweeteners…

It is made from natural plant based ingredients, instead of produced chemically.

That’s why I added it to this list! Plus, Stevia is a wonderful option for anyone dieting, especially with the keto diet!

When I’m on keto to lose weight, this is the main sweetener I reach for to add to dishes and fat bombs.

Upon further research I found there are many ways to use dates as a substitute for real or fake sugars.

Similar to Stevia, monk fruit is a good alternative to fake sugars when it comes to dieting and keto.

Monk fruit by itself does not contain much sweetness, so it is mixed with dextrose.

Monk fruit is found in granulated sugar form and can be used in a variety of dishes.

No it’s not just for pouring over pancakes, waffles and French toast! Maple syrup is extremely versatile and is used as a sweetener and substitute for fake sugars in many recipes.

But be careful because it is not diet friendly!

Although they are not keto friendly, I use bananas in recipes when not on keto because of how much potassium is in them. (I tend to run low on potassium).

My favorite recipe for using bananas as a substitute for both real and fake sugars is making banana ice cream. YUM!

Simple mashup bananas for a recipe you need. Be aware that bananas do add more moisture to a recipe, but they add a wonderful sweetness!

What Not To Say To Someone Going Through Infertility

Fake sugars are in thousands of products in the food market. I guarantee that you probably are consuming artificial sweeteners more than you are aware of.

So how do you begin to decrease or even eliminate fake sugars from your diet for your fertility health?

Remember that even though there are only six artificial sweeteners cleared and recognized by the FDA, those six fake sugars go by many different names.

You not only have to read nutritional labels, but also recognize the different names of artificial sweeteners.

While there’s not much research for artificial sweeteners and fertility… More research needs to be done!

With fake sugars I feel it’s best to stray on the side of caution, especially when you’re trying to conceive!

Start today by decreasing or possibly eliminating fake sugars from your diet to help your reproductive health!

What is agave syrup?

What are the benefits of coconut sugar?

3 ways to use dates as a sugar substitute